Since 1919, the Purdue “All-American” Marching Band has performed on race morning, opening the day’s festivities with live music and entertainment. Since 1946, Purdue has accompanied the majority of the “Back Home Again in Indiana” performers, bringing the historic anthem to life every year. Purdue has also participated as the host band for the AES 500 Festival Parade, held the day before the race, since the parade’s inception in 1957. This story is part of a month-long, behind-the-scenes look at Purdue’s storied history with the Indy 500.

Purdue at the Indy 500: Krupa Patel enjoys returning to play piccolo at the historic racing event

Growing up as an Indian-American, I had a lot of religious figures and people in movies, cartoons and stories where the flute was portrayed. We also have Krishna, one of our religious gods, and he plays the flute. That cultural background got me interested in the flute at first, but I also liked its sound, so I decided that it would be my main instrument. Now I play the piccolo, which is similar to the flute but can play higher notes.

When I was in high school, I was a part of a band that was able to march on the Indy 500 track with lots of other high school bands, and when I was there, I actually saw Purdue playing, just like they do every year. I thought, “Oh my gosh, that’s so cool. I want to do that.” And so now, here I am, years later. Doing it. It’s really nice to be back.

Before the race begins, we march from the middle of the last turn to the starting bricks, which is about half a mile. While we are marching, we are doing cadences and playing songs for the crowd. The most iconic songs we play are “Hail Purdue” and “Back Home Again in Indiana.”

It’s nice to be a part of something with such a long tradition. The directors trust us enough to be a part of those traditions, and us being there is one of the more noticeable ways Purdue is involved in the Indy 500. We’re playing loudly, we’re in our little snazzy uniforms and we have our Big Bass Drum that everybody recognizes. It feels awesome to play a part in the whole thing.

It’s nice to be a part of something with such a long tradition.

This student spotlight is part of a special series highlighting Purdue’s many connections to the Indy 500. Thank you to Krupa Patel (junior, psychological sciences, human development and family studies ’23) for sharing your story with us. 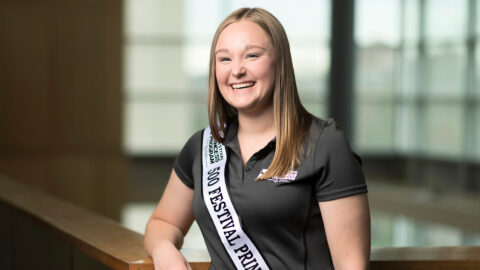 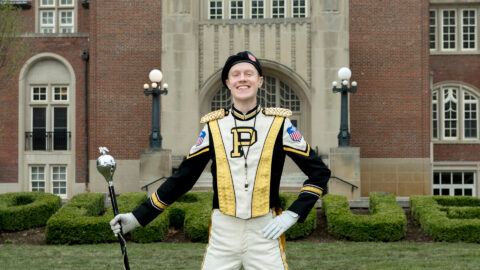